The turbulent healing powers of plasma 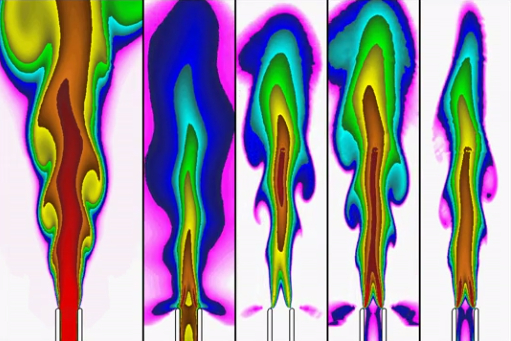 The jets of plasma that doctors might use, however, often become turbulent with the direction and velocity changing dramatically. Now, researchers have found this turbulence likely emerges from heat-induced sound waves generated at the plasma electrodes. This new insight is critical for more consistent and effective medical therapies.

“Now that we understand where the induced turbulence in atmospheric pressure plasma jets is coming from, it may be possible to better control it,” said Amanda Lietz of the University of Michigan, who is an author of a new report discussing these results, based on computer simulations, appearing as the cover article this week in the journal Applied Physics Letters.

A plasma is an ionized gas consisting of the positively charged ions and free-flowing electrons. They tend to be extremely hot, like those found in fusion devices. Non-equilibrium atmospheric pressure plasma jets, however, are cool to the touch.

In a typical medical device, atmospheric pressure plasma is made from a noble gas such as helium. An electric field ionizes the helium by removing an electron from each atom, creating a plasma that’s not only at atmospheric pressure, but is also near room temperature.

The plasma flows through a handheld, pen-sized instrument and exits as a high-speed jet. The jet mixes with ambient air, which is filled with chemical species such as oxygen, nitrogen and water vapor molecules. The fast-moving electrons in the plasma slam into these molecules, producing highly reactive species such as hydroxyl and nitric-oxide molecules. These radicals, as they’re also called, are therapeutic.

Scientists still aren’t entirely sure why these plasma-produced radicals are so beneficial in human therapies. They hypothesize that the reactive particles may induce an immune response in the body or modify the biochemical signaling agents between cells. In the case of cancer, the radicals might also trigger an oxidative stress response. Because cancer cells are already in a more stressed state than healthy cells, the radicals may push the cancer cells over the edge, killing them while healthy cells remain unharmed.

To kill exposed bacteria, the radicals can tear into the bacterial cell walls. Plasma, therefore, also can be used to sterilize surgical tools. Although plasmas are used for cutting in surgery, the FDA hasn’t yet approved direct plasma treatment for wound healing and cancer, although doctors have used it in isolated, FDA-sanctioned studies. Clinical trials in Europe have already begun.

One problem is that the plasma jets can be temperamental, according to Mark J. Kushner from the University of Michigan and also one of the paper’s authors. Sometimes the jets are perfectly laminar and even. Other times they’re turbulent, leading to irreproducible results.

“From a clinical standpoint, that’s probably not what you want,” he said. “To obtain FDA approval of a plasma process, you want to be able to say that every time I treat the patient I’m treating in the same way.”

At the same time, you might want some turbulence to make more of the radicals needed for a particular therapy. Regardless, no one was certain what causes the turbulence.

When the researchers simulated the plasma jets, they found that the electrodes in the instrument—which are needed to create the electric field that makes the plasma—generate heat. This heat spawns a sound wave that travels out through the jet and along the boundary where the plasma meets the air, a layer that’s prone to be unstable. The sound wave disturbs this layer, likely triggering turbulent plumes.

Now that this phenomenon is relatively understood, Kushner said, researchers can enhance or dampen this effect, depending on what’s best for the patient. Ultimately, he said, this new analysis can lead to an approved and reliable treatment.

Original article can be found at: https://phys.org/news/2017-09-turbulent-powers-plasma.html#jCp